Bike commuting is increasingly popular in Seattle and so it is not uncommon to see parents biking with one or more of their kids on a bike seat or in a trailer attached to their bike. I have to confess, I get anxious when I share the road with these parent & child bikers. So I thought I would see what the childhood injury prevention specialist have to say on the subject of kids on parents’ bikes.

The American Academy of Pediatrics recommends NEVER putting a child under 12 months in a bike mounted seat or a trailer. They are simply too young. Take a bus, carshare or walk. If you are going to bike with your >12 mo. old, the AAP recommends bike-towed trailers rather than putting them in a bike-mounted seat. While trailers have visibility issues in heavily trafficked urban streets, research indicates they have a lower incidence of injuries than bike mounted seats. And as between front vs. rear mounted child seats, the rear mounted seat is safer. The national pediatric group also recommends riding on bike paths and (obviously) streets with fewer vehicles.

So it is not this: But even with the preferred trailer and rear-mounted seatconfiguration, what were Brad and Angela thinking? That is a lot of kids to manage, even for Hollywood’s leading man. And why are only 50% of their family wearing helmets. 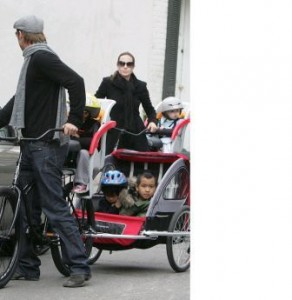 Even with these recommendations, Phyllis Agran, MD, a pediatrician who has written many of AAP’s policies regarding childhood injury and trauma says that riding with your child on city streets “extremely risky“. The anxiety I experience when driving by a mom or dad with their child strapped to their bike apparently is not misplaced. I understand a parent’s desire to ride with their child. It supports many worthwhile values, from the macro (reducing one’s carbon footprint) to the micro (expending calories while getting to work and day care).

But too frequently in my work as an injury lawyer I have seen the heavy toll a bike accident involving children can have. Sharing the road is scary enough when it’s simply a bike and the adult rider. Add a child sitting over the rear wheel, or sitting four or five feet behind and three feet below you and it’s a whole other story. Biking parents – think about it. And if you are driving your car near any cyclist, particularly one carrying a child, give them room…lots of room.

This is the Sidebar 1 Widget Area. You can add content to this area by going to Appearance > Widgets in your WordPress Dashboard and adding new widgets to this area.